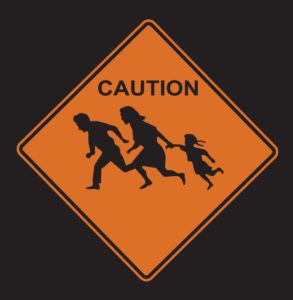 The situation roiling around illegal aliens, particularly the separation of children from their families, is shining a bright light on a few issues that make me want to hit things with a bat.

Actually, it’s not so much the issues themselves, as the cynically deceitful opportunism of all the politicians spouting off about them.

The term used depends on whether the speaker or writer is a supporter of the hard-heartedly cynical Trump administration and the Republicans, or a supporter of the astonishingly deceitful Democrats. Or would that be the tough on crime Republicans and the compassionate Democrats focused on the fair and ethical treatment of all? Hmmmmm…

In any case, those on both sides are blatantly opportunistic; never missing a chance to boost their own team and/or bash the other. As will become clear, boosting and bashing is a far higher priority than figuring out what to do about… let’s call them “folks” …coming into the country.

Breaking it all down into three set of issues puts things into a perspective that we can get our brains around:

Let’s consider them one at time. And let’s remember that the political class is gleefully ignoring their legislative responsibility, and remaining focused on the boosting and bashing of their opponents using clever, cynical, deceitful rhetorical nuance..

Another critical point is that it happens all the time in the U.S., has been happening for a long, long time, and has been done by both Democrats and Republicans. The child of a native born American citizen who is sentenced to prison for any offense is separated from that parent. That’s been going on for centuries!

Yes, the Trump Administration has taken separation of illegal, undocumented, alien, immigrant, migrant parents from their children to a whole new level, but the Obama, Bush, Clinton, etc. Administrations also did the exact same thing. (If one were to speak tongue-in-cheek, one might refer to how Clinton and Obama arrested only nefarious “illegal aliens,” while Bush and especially Trump are rounding up every single innocent “migrant” in sight!)

Put these thoughts on hold for a bit, and let’s consider the relevant immigration law. First, the Immigration and Nationality Act of 1952, among other things, establishes that the first illegal entry into the U.S. is a misdemeanor offense that carries fines and no more than six months in prison. In other words, illegal entry into the country is …ummmm, illegal. It’s a crime. You’ll get arrested and detained for doing it. It’s the law of the land. Congress passed this law. The Judicial Branch has upheld it and made rulings to clarify it. The Executive Branch is duty-bound to enforce it. And then there’s “prosecutorial discretion” which I’ll come back to shortly.

Next, the “Flores Settlement,” a 1997 Federal Consent Decree, requires the government to release children from custody within 20 days – whether they came into the country with their parents or not – to one of several specific individuals or groups following a specific priority sequence.

Finally, the United States Court of Appeals for the Ninth Circuit issued a decision in 2016 regarding the Flores Settlement. Here’s the operative phrase from that decision: “We hold that the Settlement applies to accompanied minors but does not require the release of accompanying parents.”

So bottom line, by law, the Executive Branch is required to:

“Prosecutorial Discretion.” There’s that phrase again, so let’s dive into it.

“Prosecutorial Discretion” is the authority of a government agency, or an individual officer of that agency, to decide what charges to bring and how to pursue each case. This authority to exercise discretion in deciding when to prosecute and when not to prosecute is a long-recognized, critical part of U.S. law. It is in fact, an inherent part of our system.

Both Clinton and Bush were pretty much hands-off regarding the application of Prosecutorial Discretion. They left those decisions to the enforcement personnel directly dealing with illegal border crossings. The Obama administration was considerably more aggressive in applying discretion, prosecuting only about 21% of illegal border crossings. The Trump administration instituted a zero-tolerance policy, prosecuting 100% of cases.

Trump and the Republicans – wanting to beef up their credentials as tough guys regarding illegal immigration (or whatever you prefer to call it) were and are cynical enough to opportunistically exploit the fact that the ruling by the left-leaning 9th Circuit made family separation inevitable. The phrase, “We’re enforcing the law put in place by Obama!” is technically true. The cynicism comes from the fact that Trump assumes we’re all too stupid to know that prosecutorial discretion could be applied on a case-by-case basis.

The Democrats – wanting to bash Trump and the Republicans as heartless SOBs who could care less about helpless children – were and are deceitful enough to endlessly repeat the mantra that “There is no law or court ruling that mandates family separations.” True enough, BUT… They know damn well that the combination of a law, a consent decree, a court ruling and suspension of prosecutorial discretion DOES require it. It takes some deceitful rhetorical skill to make a true, and also truly misleading, statement.

So let’s blow away the smoke and recognize that it all boils down to prosecutorial discretion and the failure of the politicians in Congress to do their duty.

Congress has shirked its responsibility to pass legislation that spells out how to handle immigration issues. Both Republicans and Democrats in Congress continue not only to shirk, but to actively avoid doing their duty. They’re all too busy hurling slurs and insults at each other, and mugging for the media – on both the left and the right – who revel in throwing gas on the fire and demonizing the other side.

I repeat. Congress has and continues to shirk its duty to pass appropriate immigration legislation. Individual Congress People have and continue to opportunistically exploit immigration issues in attempts to make the other side look bad.

So in conclusion here’s my message to Congress: Shut the hell up, stop shirking your duty, stop hiding behind prosecutorial discretion thus abdicating power to the executive branch, put re-election and the bashing and boosting aside and focus on passing immigration legislation that we the people will be proud of.