My Guns and Shooting Story 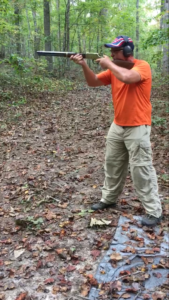 For the first 59 years of my life, I never fired a gun. I actually touched or held one maybe 4 or 5 times in all those years. Never really thought about it much. I just wasn’t part of my world. My grandfather was a hunter and had a dozen or so shotguns and hunting rifles that I found to be mildly interesting as kid. Lots of the guys I grew up with were hunters. My stepfather had 4 shotguns on a rack in his family room. So it’s not like I wasn’t aware of the sport. I just never had any interest in guns.

I also never much thought about the gun control thing either. I’ve got some opinions now, but I’ll leave a more detailed discussion of those to a different episode. For the record though, a few quick comments. I’m closer to the “you can take my gun from my cold dead hands” end of the scale, but see very valid points made by both sides. Mostly I range from amused to enraged by all of the hysterical rhetoric around the issue. Anyway, as I said – I’ll save further comment for another episode.

Back to the story at hand… In January of 2013, while my older daughter and son-in-law were visiting, Zach suggested we go to a gun range for fun. We did. I was a hoot! He’s quite knowledgeable – and patient – and taught me the basics. I did my part as the cool father-in-law and rented a Dirty Harry 44 Magnum Revolver for us to try out. I couldn’t hit a damn thing with it, but LOVED how everyone else in the range walked up behind us asking, “What the hell was that?” That sucker was LOUD!

Then a year went by. They visited again – we went to the range again – and it was a lot of fun again. Ditto that in the summer of 2015.

Then in late 2016, I decided I was going to give this target shooting thing a serious try. I did a bunch of research on self-defense, home-defense, recreational target shooting and the amazing variety of gun options and features. I decided on and bought a 9mm Glock 34 Gen 4 semi-automatic pistol, took a 2-day basic pistol course, joined a local shooting range and realized I’d gotten hooked.

I’ve since bought a few more handguns – including my very own Smith & Wesson Model 629 44 magnum 6-inch barrel stainless steel Dirty Harry most powerful handgun in the world and will blow your head clean off revolver… and a few rifles – including a 9mm AR-15 and a 1890s design lever-action, 357 magnum carbine. (If you’re old enough to remember John Wayne cowboy movies or Chuck Conners in The Rifleman TV show – you get the picture.)

Right now – actually for the last 18 months or so – I’ve also become a big-time fan of skeet shooting. That would be using my way-cool, used, Beretta 686 White Onyx, Over/Under 12 gauge shotgun.

Let me stop a minute here, and step back to talk about the “why.”

Why does a 59 year old, now 64 & semi-retired business-guy-entrepreneur with my life experience get a bit intrigued, then interested, then absolutely hooked on guns and shooting? I thought about it. A lot. I thought about it (of course!) in the context of having more fun than anyone else I know. I realized that the answer to that simple question is surprisingly complex – and cool – and interesting – and fun! For me, it breaks out into 5 distinct categories:

I’ll make a few observations about each of them – and mostly in the context of shooting skeet.

As a kid and young man, I was a legitimate athlete. Not a great one – but, I was at least competent at pretty much every sport I ever tried. I played 4 years of Division 1 college football – my last 2 years as the starting right guard for the Brown University Bears… OK… Ivy League football. …but still, REAL Division 1 College Football. As an older guy – in my 40s – I earned a 2nd degree black belt in Choi Kwang Do. And last summer I did the 100-mile “Century” on my bicycle. Today… I still get some real exercise 4-5 days a week and am proud of my status as an official, hard-core, has-been.

I also have to mention the pure, visceral thrill of feeling and hearing the blast of the shot itself. That alone is purely and simply – fun.

Which brings me to the mental aspect…

SO, so much of skeet shooting is mental. I’m at the game now for 18 months. I’ve yet to shoot the perfect 25-shot round. Lots of 22s & 23s – a handful of 24s, but no 25. …….yet! I can and have solidly hit every single shot, lots and lots of times. There is no skeet station I haven’t mentally mastered in terms of hold point, look point, lead, timing and adjustment for wind. I’ve solidly hit ‘em all over and over and over. Just not that 25 in row.

My physical skill is not the issue. It’s my mental focus – the ability to visually lock in on and maintain focus on the bird. And trust me. I’ll let you know as soon as I get my first 25!

I mentioned competition earlier, and that’s one of the things that genuinely intrigues me. There are true, formal shoots sanctioned by the The National Skeet Shooting Association. There’s the much less formal Tuesday night league I belong to. And then there’s the really intense competition I have with myself. I don’t see any end to that last one. As soon as I get my 25, I’ll be focused on getting my first 100 – then first 200, etc. Luke Deshotels, the guy who manages the range I go to once shot 998 out of 1,000. I’ve got a ways to go…

The third aspect of shooting for fun that intrigues me is the technical.

The first recorded use of a firearm was in 1364. That means there are six and half centuries of technological development available for study. I’ve poked at the history some, and it’s fascinating. Go take a quick look at the “firearm” entry on Wikipeida. That’s a great jumping off point for research. Read American Gun: A History of the U.S. in Ten Firearms by Chris Kyle. Google “comparison of bullet calibres.” You’ll be stunned by the variety.

And then there are the actual technical aspects of shooting. Check out a few of the NRA’s educational offerings. Head over to YouTube and check out the Hickok 45 channel. Careful though… You could easily spend the rest of the year doing nothing but learning about the endless supply of “how-tos”

The social aspects of my shooting hobby are easily the most surprising. It’s not hard to picture a bunch of knuckle-dragging rednecks when you conjure up your notion of “gun guys.” That was pretty much my notion, and I was flat totally wrong! Take my skeet league, for example. There’s a manufacturing plant manager, a retired railroad exec, several accountants, and an Air Force Pilot. There are whites, blacks and Asians. While it is mostly men, there are a surprising number of women. And yes, of course there a few card-carrying good old boys.

Most striking to me is the overall attitude. In addition to the “melting pot” of different types of folks, there’s a total lack of condescension on the part of the really good, highly experienced shooters. They’re universally helpful. Everybody seems to understand everybody else’s skill level. The cheers and fist-bumps abound when you make a shot that – for you – is particularly good. Need a tip? Just ask. Problem with your gun? You’ll get multiple offers to borrow one for the day. Comradery? It’s everywhere.

The part of the gun community I’ve met so far is by far the most diverse group and among the most interesting folks I’ve ever hung out with.

Which leads me to the most unexpected result from my gun hobby – investing.

There’s an indoor shooting range 10 minutes from my house. The shotgun range I use is 15 minutes away. The nearest outdoor range that accommodates all types of firearms though, is more than an hour’s drive away. It was just plain inconvenient. And expensive to join.

So I started looking around for a piece of land I could buy that was close by and big enough to accomodate my own personal shooting range. I found 11 acres an easy drive away just north of metro Atlanta. It fits exactly what I wanted and I bought it for a song. And here’s the investment part… There’s a major interstate, that’s getting two lanes added to it, that narrows down to a 4 lane state highway about 5 miles south of the property. In other words, economic development is spurting up from Atlanta directly at what I now refer to as Camp Youngblood. In just over a year, it’s value is up more than 15%.

So that’s a summary of my shooting hobby story. From the physical, to the mental, to the technical, to the social, to the investment strategy. I’m hooked, and it’s a significant part of what enables me to have more fun that you! ????

If you’re interested in giving shooting a shot, (sorry…) getting started is easy. Find a local gun range and just go. They all cater to total newbies. They won’t treat you like an idiot. They will get you started safely. And it won’t cost all that much. For about $50 bucks you can get (probably unlimited) range time, gun rental, ammo, targets and eye & ear protection.

It took me six decades to find this amazing new hobby. Don’t wait that long!