By Bill Ramsey May 18, 2018 Intentionally Vicarious, Politics No Comments
0 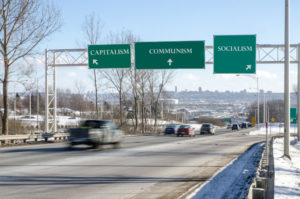 Do you lean to the left or the right politically? According to the politicians, we all need to choose one team or the other. The media relentlessly pounds us with a perspective that demands we make a choice between the two. It’s all such a load of simple-minded nonsense.

…unless of course you’re dedicated to shallow thinking and blind support of your chosen political party.

Read through the following statement, then think about it:

“I am, at the Fed level, libertarian; at the state level, Republican; at the local level, Democrat; and at the family and friends level, a socialist.”

I got the quote from the book “Skin In The Game: Hidden Asymmetries In Life” by Nassim Taleb. He attributes it to Geoff and Vince Graham. It contains a notion that hit me right between the eyes. If I were a bit more intellectually astute, I’d have written those lines myself! Given that, I encourage you to cogitate about it a bit, and ruminate regarding the implications to your own philosophy, all the while keeping in mind that Scale matters!

I’ll repeat the concept… “I am, at the Fed level, libertarian; at the state level, Republican; at the local level, Democrat; and at the family and friends level, a socialist.”

Now I’ll share what’s rolled through my brain. I encourage you to be honest enough with yourself – regardless of your existing thoughts, opinions and political leanings – to go through a similar exercise.

For the last fifteen years or so, I’ve self-identified as “Libertarian-ish.” Freedom and personal responsibility are two precepts that are at the core of my belief system. I did my best to beat the paramount stature of freedom and personal responsibility into the heads of my kids. I want the federal government to pretty much stay the hell out of my life. Provide for national defense, maintain a system for the protection of personal property and enforcement of contracts… Look… rather than listen to me go through the whole list, just refer to Article 1 Section 8 of the Constitution for the 18 things the Founding Fathers deemed appropriate for the attention Congress. Just 18 things. That’s it. Suffice it say, I strongly support the notion of a very limited central government.

In terms of my voting record, I’ve cast my lot with Republicans my entire life …with one exception that I’ll get into shortly. My real point here is that it was NOT a great leap for me to identify with the first part of the quotation about being libertarian at the federal level.

So leap with me now to the 4th part. The part about being a socialist at the family and friends level. Me? In any way a socialist? Ummm…. HOLY CRAP I’M A SOCIALIST!!!

Not only that, I’m a socialist at a very deep-down, instinctive level. Here’s an example. I recently had some folks over to my place for a low-key get-together. Here are a few facts that ran through my head during the planning:

The list went on, but my point is that for family and friends, of course I was going to shop for, buy, pay for and provide everyone’s beverage of choice regardless of their own ability to get it for themselves.

Another example. A few buddies and I recently met at a WalMart parking lot to carpool the 30 or so miles to my campground/shooting range in the North Georgia mountains. Dummy here forgot his wallet and had a near-empty gas tank. Without any real thought, I asked Sal for his credit card so I could fill up, and without any real thought he handed it over. He also picked up the tab for my lunch later that day.

We’re friends. Have been for a long time. OF COURSE I had no doubt he would unquestioningly help me. OF COURSE he did so without a second thought.

Now, I know for a fact that Sal holds the right-wing “personal responsibility” thing as near and dear to his heart as I do, but he didn’t apply it to me because I’m at his friend level. (And he’d never even think to ask me to pay him back… At least not until now that I’ve published the story and given him ammunition to mercilessly bust my chops about how I owe him…)

While raising my kids, do you think I set an expectation that they would use all of their ability to achieve? You bet I did! Now that they’re adults with their own families, would I still do anything I can to help them out? Again, absolutely. How close is that to “from each according to his ability, to each according to his needs?” YIKES!!! I’m still so stunned that I’ve got to say it again – I’m a socialist (…at the friends and family level.)

So where do I stand on the local level?

Back to my voting record… On 11/7/2017, for the very first time, I cast a vote for a Democrat. I sided with Mary Norwood in her quest to become Mayor of Atlanta. She lost. (By the way, all of the candidates were Democrats. Not a single Republican in sight!) I also voted for Amir Farokhi that day, another Democrat. He won his race for Atlanta City Council. I had met Amir at a public forum of candidates and really liked both him and what he had to say.

He and I met again one-on-one after his win and I offered to help him out with whatever initiative he feels is a good match for my skill set. I continue to very much agree with and support what’s he’s doing to make my community better.

That said, if Amir were a U.S. Senator or Congressman, I’d be dead set against what’s he’s working to accomplish. It’s one thing to help the residents of the public housing on Boulevard in Atlanta’s Old 4th Ward to find a job. It’s a totally different thing to implement the same sort of program on a national scale. Scale matters!

Look, I could easily build a sturdy, reliable footbridge across the small creek on my North GA property all by myself with materials purchased from Home Depot. I DO NOT, however, have the wherewithal to build one across a 100-yard stretch of the Chattahoochee River. Nor does Home Depot carry all the required materials. Scale matters!

When I moved to Kennesaw, GA in 1989, a pair of stop signs was more than adequate to control the traffic at the intersection of Due West Road and Due West Road. (I swear, there really IS such an intersection!) By the time I moved to Atlanta in 2014, both roads were 4 lanes wide with extra left turn lanes in all four directions. Those two little stop signs became woefully inadequate years ago as traffic dramatically increased. Scale matters!

WellStar took over the Atlanta Medical Center two years ago and transformed a worn-out, frankly scary hospital into a model of effectiveness and efficiency. Why not charge these folks – who have a proven record of success – with reforming healthcare on a national basis? Because they’d be freakin’ clueless and inept, that’s why. Scale matters!

So to clarify where I stand… I’ve just openly acknowledged that I am indeed a Socialist at the family and friends level. I’ve also just openly acknowledged that I voted for and am a fan of the Democrats running District 2 in the City of Atlanta. I cannot picture myself voting anything but Republican in any state of Georgia level election. I remain staunchly Libertarian-ish with regard to the Federal government, and believe we need to massively cut the federal budget – putting all that money and power into the hands of the politicians at the state and local level – where we can reach out MUCH more easily to grab them by the throat and choke them when they screw up.