Senior Baseball? or Old Man Baseball? Who cares???!!! AAMSBL may not be a familiar acronym, but the Atlanta Area Men’s Senior Baseball League is for real. It’s even part of nationwide organization. My colleague and friend Bruce Kopkin, Vice President of Sales for BrightWater Consulting, downright beams when he talks about “playing a kid’s game with a 60 year old body.”

The Men’s Senior Baseball League (MSBL)/Men’s Adult Baseball League (MABL) is the premier amateur baseball league for adults 18 years of age and older (much older!). Founded in 1988, it is the fastest-growing adult baseball organization in the country. The league has 325 local affiliates, 3,200 teams and 45,000 members who play organized amateur baseball in local leagues, 30 regional tournaments and six national tournaments. 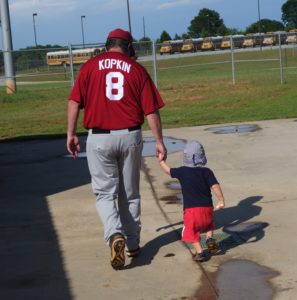 It probably shouldn’t have been surprising, but Kopkin assured me the sort of “bang-bang” play you see from the major leaguers is replicated every Sunday in their 18-game season. And again in every game of the regional and national playoffs. Sure the reaction time to hit the curve is a bit slower, but then again, the pitch itself is coming in slower. The essence of the game is unchanged!

Easily my favorite part of this conversation was Bruce’s description of his triple play. Bases loaded, no outs. Hot liner down the third base line that he snags backhanded on the first hop – tags the runner – steps on third for the force out – “fires” the ball over to first for out number 3 on the batter. THAT story alone is enough to make us all think about a comeback!

Time in the dugout while your own squad is batting provides a chance to get to know teammates. Father’s day is always a big deal with cheering families. (Don’t you love that photo of Kopkin and Grandson?) Trash talk (that quintessentially guy thing) is ever-present – just complemented by the smell of BENGAY.

Quit talking about how good you were back in the day. Go for it!

No get out there and implement your own vicarious.
Do it now and post that IV Score!