How on earth did we reach a point where 3/4 of us think that Congress is pretty much a waste of space?

Here are a few thoughts… Our Founding Fathers – a legitimately amazing group of people – decided… and I quote Article 1 Section 2 Clause 3 of the Constitution of the United States – “The number of Representatives shall not exceed one for every thirty thousand.” That’s a ratio of one representative in the US House of Representatives for every 30,000 citizens. That very fundamentally American notion – that the voice of the people MUST be loudly and clearly heard by the government – as Lincoln put it – “of the people, by the people, for the people” – was ratified by the Constitutional Convention in Philadelphia in 1787.

Today… there’s a representative in the House for every 745,000 citizens.

Let’s think about it differently… Each American citizen’s “voice” in the federal government has been diluted by 2,400% since the Constitution was ratified. Let THAT sink in. Think about your glass of bourbon that started out at 80 proof being diluted by the same amount. The cough medicine you give your children has a WAY higher alcohol content than that!

Here’s another way to think about… Think in terms of an NFL football stadium. Since I live in Atlanta, I’ll use the new Falcons stadium as my example. A congressperson could invite every single constituent and only fill that stadium to 42% capacity using the Constitution’s original ratio.

Using today’s ratio, a congressperson would need the Falcons to increase the stadium’s capacity by 950%!!! Instead of the bargain price of only $1.6 billion, it would have cost them $16.8 billion.

In 1787 all of a Congressperson’s constituents would fill less than half of the Atlanta Falcons’ new football stadium.

Think about how hard it would be to gain an understanding of the wants, needs and opinions of 30,000 people. Personally, I’m a bit overwhelmed by the thought of trying to do it. But you and I, my friends, are 1 of 745,000 people trying to communicate our wants, needs and opinions to our congressperson. I’m sure they carefully listen to each and every one of us… Hmmmmphhhhh…. Or maybe, just maybe, they rely more and more on a few, hand-picked, high-dollar-contributing, so-called experts.

I’ll spare you my political opinions. I just ask that each of you think about and reach your own conclusions about what we as citizens should do about our voice in government being reduced by 2,400%. Is is really a surprise:  U.S Congress Approval Rating – 13% 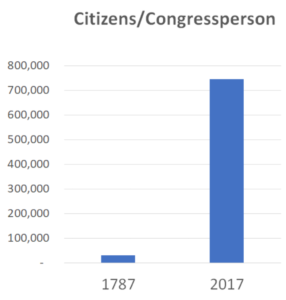