What makes an artist? The answer to the question, “What makes an artist?” always struck me as mysterious. So I’ve started on a mission to figure it out. From what I’ve learned so far, maybe it’s not that mysterious after all.

Conventional wisdom tells us that “good” art is art that any of us likes as an individual. For a long time I thought that was pretty much BS. That said, a decade or so of seeking out and looking at various types of paintings, sculptures, architecture, photographs, etc. to determine what I think, has convinced me that the conventional wisdom is probably right.

The key to appreciating art is pretty simple:

It’s no more than that. And it’s a process that led me to meet Tom Chambers, the creative mind behind Branching Out Art. and an excellent example of “What makes an artist.” Here’s how it happened… 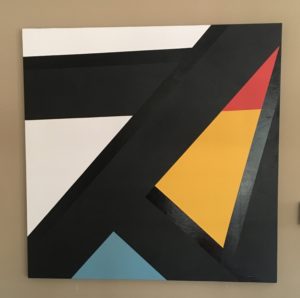 For whatever set of reasons, I decided I wanted a “three dimensional something” to hang on my dining room wall next to what is in my mind an amazing painting by Serge Nitegeka. (Shown here to the left.) I was thinking probably a metal wall hanging of some kind.

Then last Fall a friend showed me a feature on Chambers in the Atlanta newspaper. That led me to his website and eventually to his studio. (…which is in Blairsville, GA. Spectacular, but remote!)

As I explained to Tom, along with his wife Brenda, what I wanted, why and why, the piece shown here to the right kept catching my eye. An hour or so later I’d not only commissioned a piece, but had this one in the back seat of my car!

So obviously, I think the art Tom Chambers creates is very cool!

And there’s more. I also got to know the man that day; and got to know him better when I returned to his studio to pick up the newest piece. Here’s a guy who initially got interested in art because of his high school art teacher who also happened to be his football coach. How’s that for an unexpected twist?

In college, Tom majored in art and continued his football career. Then, to avoid becoming the stereotypical “starving artist,” he got a job in retail to pay the bills for the next 34 years. During that three decade span he continued to dabble in art, usually to fill up a blank wall when he moved into a new house in a new city that his career sent him to. It was one of those times that his wife suggested he “do something with sticks.”

You owe it to yourself to listen to this episode to hear Tom explain how he makes his creations happen. From gathering sticks, stripping off bark, priming, conceiving of an idea, painting in some background, joining the branches in the pattern his muse dictates, to adding the finishing touches.

We also discussed some of the business aspects of Branching Out Art. The one thing that surprised me here – though in retrospect is shouldn’t have – was the amount of effort he’s invested in identifying his customer base. Turns out, I’m a prime target as a guy who lives in the city, but still likes mountains, the country and the outdoors.

Do yourself another favor and visit his web site and Facebook page. You might find something that looks as great the piece shown below looks in my dining room!